Nollywood Actor, Deyemi Okanlawon has reacted to the angry remarks of veteran colleague, Genevieve Nnaji who called him out for making a joke about a challenge that protests the unjust killing of women otherwise called Femicides in Turkey.

Women all over the world have been sharing their pictures in black and white hues as a sign of protest against the perceived targeted attacks on women in Turkey. So many women have been found dead in recent months. The non-challant attitude of the government in stopping these femicides provoked other women across the world to launch a movement that will be hard if not impossible for the government to ignore.

However, Deyemi Okanlawon who participated in the challenge for the sake of comedy shared a picture of himself, dressed like a woman while donning a wig in black and white. Other celebrities such as Kenneth Okolie, Don Jazzy, Uti and the likes also shared similar pictures in black and white hues to participate in the challenge tagged #ChallengeAccepted

Angered by Deyemi’s perceived disregard for the movement, Genevieve wrote;

“We seek solace in humour to distract us from pain or discomfort. Tell me what it is you feel exactly?

You see, that feeling that triggered you to make a joke of a movement that can only be understood by those it was meant for; the feeling of being overlooked or disregarded is part of the point of the challenge.

No one likes to feel invisible. You felt it for a second. Women feel it every day of their lives. Let us hold our own hands if we want to. Be ok with it.

Not everything is about you or for laughs. Shalom.”

Deyemi who felt remorseful for his action, posted Genevieve’s picture in black and white on his Instagram page, he captioned it; 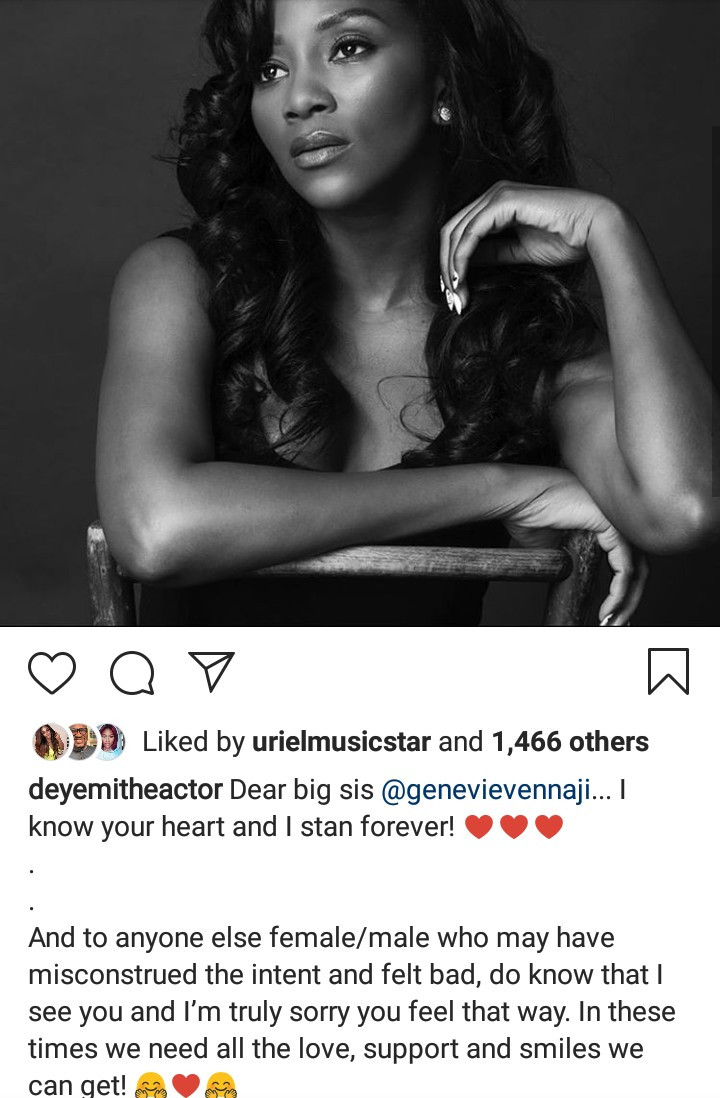 “Dear big sis @genevievennaji… I know your heart and I stan forever! And to anyone else female/male who may have misconstrued the intent and felt bad, do know that I see you and I’m truly sorry you feel that way.

In these times we need all the love, support and smiles we can get! ”