Sowore: Don Jazzy, Adekunle Gold and many others react to Charges

Don Jazzy and Adekunle Gold have taken to their twitter handles to react to the charges prefered against Omoyele Sowore by the Federal Government, who have been charged with Treasonable felony for protesting against the Buhari Administration.

Several reactions have continued to condemn the charges brought against the human rights activist and pro-democracy campaigner.

The arrest and detention of Sowore have been viewed by many as silencing democracy.

Don Jazzy, in his reaction, warned Nigerians against accepting a precedent were dissenting voices are being silenced.

He called on President Muhammadu Buhari to release Sowore.

He tweeted “This dangerous precedent of stifling opposition voices and dissenting opinions has survived enough.

“Let’s not pretend our nascent democracy isn’t being sabotaged when citizens shudder at the thought of people they elected into power.

“I plead for Sowore, #FreeSowore.

“It’s really sad to watch. The young man means well for our dear Nigeria. Who is next? I plead for Sowore #FreeSowore.” 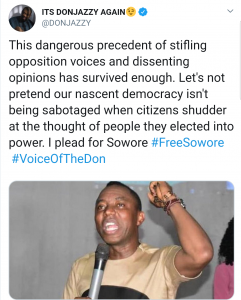 Adding his voice to the call, Orente corooner, Adekunle Gold, described the charges against Sowore as fictional.

He said, “I really don’t want to believe those fictional charges against Sowore. Treasonable what? That must be a joke.” 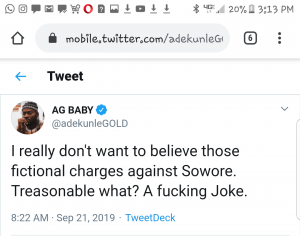 Convener of #EndSars movement, Segalink, condemned the development, describing it as disgraceful and a mockery on democracy.

Segalink said, “History is replete with the pattern of how despots always find pretext for their tyranny.

“The FG charges against @YeleSowore is disgraceful, abhorrent, unconscionable and mocks every fiber of our humanity and democracy.

“Release all political prisoners and serve the people.” 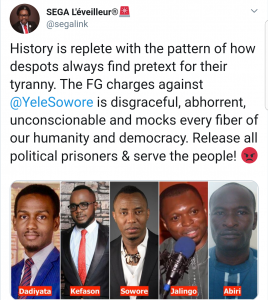 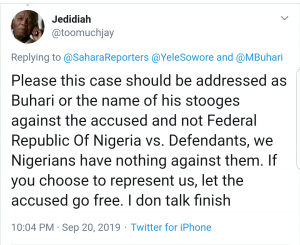 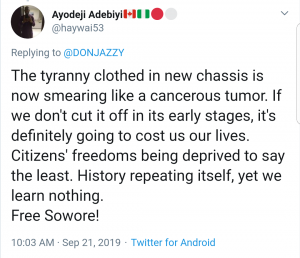 My Naira Note Is Newer Than Yours – By Femi Adesina