US President, Donald Trump has released his agenda for a second term in office, canvassing for Congressional term limits and a tougher stance against illegal immigrants and American reliance on China.

Donald Trump stated that he would strive to create 10 million jobs within 10 months as well as an additional 1,000 small businesses. He also promised the development of a COVID-19 vaccine by the end of 2020, so that the American economy can return to normal in 2021. He also promised to refill Stockpiles of critical machines and health equipment to prepare for future pandemics.

Speaking on ending reliance on China, Trump said he would bring back 1 million manufacturing jobs from China, and approve tax credits for American companies that bring back jibs from China. He promised to block Federal Contracts for companies that outsource to China and hold it accountable for allowing the coronavirus spread beyond its borders.

On Healthcare, Donald Trump promised to cut prices of prescription drugs, and lower healthcare insurance premiums as well as put an end to surprise billing.

On Education, the President said American exceptionalism will be taught to students in every American school.

Trump promised to block illegal migrants from becoming eligible for Tax payer funded welfare, health care and college tuition. He said gang members who are not US citizens will be deported immediately and he would work to dismantle human trafficking networks and end sanctuary cities.

The document finally detailed plans to launch a space force and establish a permanent US military presence on the moon.

View the rest of the document below; 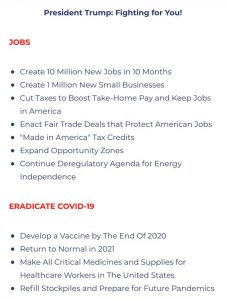 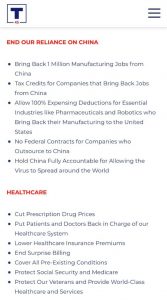 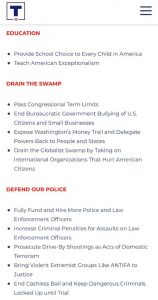 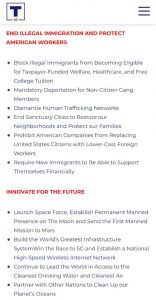 Oshiomhole Is Not My Godfather, He Works For Me – Ize-Iyamu

Why house help, 13, jumped from two-storey building in Aba