“Get the f**k out of my office” Ebun, CEO of Fitness Central Tells Customer

A video emerged online of the CEO of Fitness Central Lekki confronting a rude customer.

Here's the CEO @FitnessCentNG Lekki, Ebun Okunbajo.
Apparently a customer had a complaint and took it forward to him but he didn't like the way he went about it. So he reacted as seen in the video by being dramatic, loud and close to being violent in front of other customers. pic.twitter.com/6Y05JnqEAJ

The CEO, Ebun Okunbajo, was recorded in a heated argument with one of the business customers.

In the video, Ebun accuses the customer of coming into his office and bullying him. He stated that he would not condone such and that she should leave his office.

The lady behind the camera continually asked for a refund but he was hell-bent on her taking her leave from his office. The video appeared in a post by Challenger Brand Africa which said,

“Apparently, a customer had a complaint and took it forward to him but he didn’t like the way he went about it. So he reacted as seen in the video by being dramatic, loud and close to being violent in front of other customers.”

The post which was meant to induce some kind of reaction from viewers and readers alike took a drastic turn. Most people demanded the other side of the story as they would not believe a one-sided story. The question on most people’s lips was, “what did the customer do to him?”

“Erm, so why didn’t said customer just leave than trying to deliberately provoke him?

All we see here is a customer egging a business owner on so that she can have a record for her purposes.” 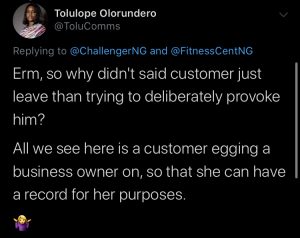 Wale Adetona (@islimfit), a digital communication expert questioned the motive behind the video. He emphasized on the fact the people want to know both sides of the story while commending Ebuns’ confidence. He tweeted

“ You uploaded this video so that we can do what exactly? This is 2020, people should stop telling one-sided stories. This man apparently has had enough of some bullshit from the said customer. Let’s have the full story…I love the guy’s energy and confidence though.” 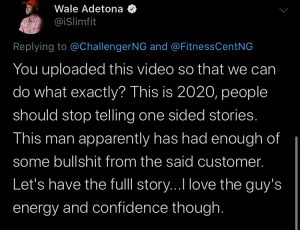 While others commended his resolve, another group attacked the bearer of the news. Oseni Olarewaju (@skinnie4life) had this to say about the handler of the account, he tweeted,

“The Handler Of This Handle Is A SYCOPHANT. This Guy Actually Showed Restraint And Never Close To Being Violent; He Was Only Obviously Agitated By Something YOU Never Showed To The Public. And The Best Line I Got From This Video…”Customers Have Responsibility”…@woye1” 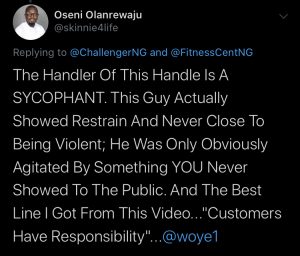 A certain user (@Drmuzoic) made a quote from the whole fiasco. She tweeted “YOU DO NOT GET TO BE A NUISANCE AND GET AWAY WITH IT

Words on a marble” 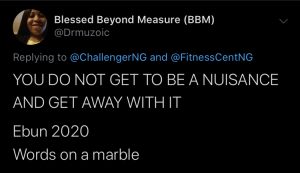 I have a keen interest in fictional stories that portray the happenings in our society. I write to bring about a difference.