Is my son transgender?

I am a 32 year old woman with three children. I have one daughter and two sons. My oldest son who is 5 years old is my first child. My daughter and son are twins and they are 18 months old. My 5 year old son has been portraying what may be considered female traits. He wants to wear make up when he sees me putting it on, he constantly wears my shoes and hats and loves dancing. Normally I would not be too concerned about this but this past July, we were visiting family friends in another state and I heard my son introduce himself to other children using a girls name. When I called him over and said, thats not your name, he said “thats my new name because I am a girl.” I do not know what to do. Should I be worried? I don’t believe in beating children or lazy advice like pray about it. I need practical information. Thank you. 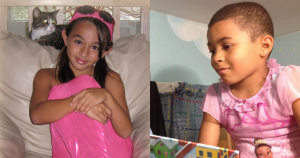 Thank you for writing in. The term “transgender” is generally taken to mean someone who has a gender identity, a gender expression, a gender performance that is outside of the expected cultural norms for their assigned sex at birth. In this case your child’s assigned gender at birth is male, but he expresses as female. There are a lot of kids in the stage just before puberty who have gender nonconforming behaviors, who I would not label as transgender. The truth is that we don’t really know whether that child who is gender non-conforming in childhood is going to go on to have a trans identity in adolescence or adulthood. What we do know is that by the time kids reach adolescence, if they have a gender identity that is different from their sex assigned at birth, that it is very likely that they will continue on to have that gender identity.

In your case, I will advice you allow your son express the gender he wants maybe privately and see how it goes. You must wait for post adolescence to make any changes. There is nothing to do but love, accept and allow your son explore. Don’t get concerned with what people will say or think, people always talk anyway. Stay focused on providing a loving and nurturing home and see how things go. There are lots of resources online for parents of transgender children. I wish you courage.

Mimi knows something about everything. If Mimi doesn’t know; who will? Write Mimi at [email protected]

-Mimi knows something about everything.
If Mimi doesn't know, who will?
Write Mimi with your questions at [email protected]