Voting has commenced in the Kogi Governorship and National Assembly election in the western senatorial district of the state, News Agency of Nigeria (NAN) reports.

INEC officials arrived as early as 7 a.m. at various polling units visited by our correspondent in Mopamuro, while accreditation and voting commenced at exactly 8 a.m. 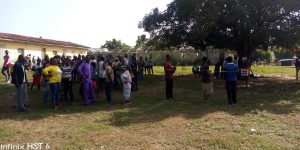 NAN reports that the elections witnessed a large turnout of voters who trooped out to exercise their franchise. The election has also been relatively peaceful in the zone.

However, there were pockets of altercation and fighting at Ward 08, PU 004, with some thugs saw around the unit.

There were only two police personnel on the ground that seemed to be overwhelmed by the crowd at the unit, but the situation has been put under control as at the time of filing this report.

NAN further reports that there was an average of four to five security personnel in each polling unit visited.

Earlier, the Presiding Officer of Aiyedayo Ward 08, PU= 04, Mr Nelson Daniel, while addressing the voters, said voting would start by 8 a.m. and end at 2 p.m.

Daniel told the voters that both the accreditation and voting would be simultaneous, saying ‘’If you are not accredited you will not be allowed to vote”.

“When you vote, please leave the polling unit. Do not use a phone in the cubicle, do not collect money from anybody,” he warned.

NAN reports that the governorship election is holding across the 21 local government areas of the state, while the National Assembly re-run election is taking place in Kogi West senatorial district, simultaneously.

Vanuatu Tribe That Worships Prince Philip Shocked By His Death