“I had a vision that Liverpool won Premier League” – Gospel Evangelist

A Gospel Evangelist, Chibuikem Eromose, has asserted that the English Football club, Liverpool FC, would be the winners of the 2018/2019 Premier League season which will be wrapped in a few weeks.

According to him, he saw a vision where the players were rejoicing heavily after they won a match, and although, he did not quickly understand the reason for the vision, he eventually realized that he was in heaven and Liverpool had won the league. 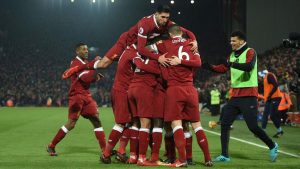 Eromose said, “In the vision about premiership, I had a vision of Liverpool. They were able to surmount some difficult tasks; they defeated their opponent effortlessly, as it was the moment of glory for the Reds.

“Their faces were filled with smiles, the happiness was out of this world, and they were leaving the stadium while their opponent bows their faces down to honour them.

“After that experience, I saw myself in the midst of people, there was jubilation all around me, I was shouting in excitement and heard myself saying I am in heaven already; it was at this point I discovered that Liverpool has won the English Premier League Trophy 2019”.

The Evangelist further claimed that being a vessel of God, he had been able to find solutions to many problems around his community and had been a source of light.

He affirmed, “I am a true reflection of the glory of God to the world. Once again I want to congratulate, Liverpool for winning the Premier League Title 2019”.