Yesterday it was reported that the Daily Mail had made serious allegations against the Nigerian President Muhammadu Buhari.

According to the Daily Mail, it was alleged that of the President’s declared assets, he had at least £1m in the Bank along with 5 houses and 2 plots of land.

Now according to News Agency Naija Standard, the attack was initiated by powerful political enemies in the hope to seriously discredit Buhari.

The enemies include Madueke Diezani and James Ibori.

You can read the full report written by Samson Shoaga of the Naija Standard Newspaper.

“Whoever fights monsters should see to it that in the process he does not become a monster. And if you gaze long enough into an abyss, the abyss will gaze back into you”-Freidrich NietzscheAS obviously stated by Nietzche, a German philosopher, cultural critic, poet, Latin/Greek scholar whose work exerted a profound influence on Western philosophy and modern intellectual history, corruption is a monster that always fight back at the hunter when the heat is becoming unbearable for the hunted.

Latest revelation uncovered through undercover investigation in United Kingdom (UK) have shown the extent at which some former ‘untouchable’ Nigerian politicians can dare fight back at the institutions of anti-corruption in Nigeria just for daring to challenge them to account for their stewardship while in office.

Naija Standard gathered that these set of politicians who before now are highly powerful in Aso Rock, Nigeria’s seat of power resort to blackmail, fabrications, planting spurious articles devoid of evidence in the media with the sole aim of rubbishing the vigorous anti-corruption war the present administration of Nigeria’s President Muhammadu Buhari has embarked upon, in so doing the no-nonsense President of Africa’s most populous nation would be disparaged. But they have failed in the process, as lies cannot overtake the truth and darkness can never ever overcome the light.

Our correspondent investigation gathered that these moves are allegedly led by arrowheads of Diezani Alison Madueke, former Petroleum Minister in the last administration presently undergoing medical treatment on cancer related ailment and James Onanefe Ibori, a-two time Governor of Delta State still in British prison serving jail term for corruption-related charges. Sources close to the aides of these politicians confided that before now they had for long had Plan A and Plan B immediately President Buhari came to power. They were to put on track their Plan B if Plan A failed.

Their Plan A was to send emissaries to President Buhari to give a soft-landing to traumatized Diezani so that she could return all the money stolen under her stewardship to Nigerian government and be left off the hook regarding any intending prosecution. You could recall that after President Buhari was sworn in, he had traveled to London, and Diezani personally made reported frantic moves to make peace with Nigeria’s leader which was rebuffed. She had sent few other people to the presidency ever after, but Buhari noted for his passion against corruption, and openly told Nigerians accountability and honesty are the only ways to good governance. Buhari’s response then was that those who misappropriated billions of Naira belonging to Nigeria’s state oil company, the Nigerian National Petroleum Corporation would soon be prosecuted.

Not long after that Diezani became restless, her nightmares seem to have come. After several sleepless nights thinking of what would become of her status with her falling health fast deteriorating, she was prompted upon by her family and close friends to continually undergo medication for her Cancer problems, after her release by UK National Crimes Agency, alongside four other people.

Ibori’s circle of friends in Britain and Nigeria also critically looked at the trial, conviction of 13 year jail term sentence served on their benefactor, and were hopeful that at the end of his UK Prison Term, he would be heralded to tumultuous celebration in his hometown in Oghara, oil rich Delta State. But when recent reports of Panama Papers scandal in one of their biggest leak hit the press globally, Ibori’s name popped up showing how he enlisted his immediate family as beneficiaries of the offshore companies and foundations with evidential documentation confirming his secret offshore tax havens to hide some of the funds he looted from the state’s treasury.

Going by rising phobia of likely further probe on the Panama Scandal of Ibori in Nigeria after he would have completed his UK jail term, it became very easy for these close friends of the convicted former Governor to accept the dangling proposals by Diezani’s contacts in Britain to frustrate the anti-corruption war of Buhari. So, Plan B was hatched. Daily Mail, London simply came handy for these politicians because of its hard stance against Buhari’s administration since elected as President of Nigeria last year.

In a calculated attempt, a falsehood story laced in tissues of lies without any evidential documentation best fit for ‘arm-chair reportage’ that could well be celebrated in yellow-journalism found its way to the front page of Britain’s Daily Mail newspaper today, just few days to the departure of President Buhari to London on Tuesday May 10, 2016 to participate in the international Anti-Corruption Summit. The story has been verified to be fake, cooked-up to cause disaffection among British citizens and bring about hatred against Nigeria. No single traceable fact in the Daily Mail reports could warrant a publication in any College Press Journal. The ridiculous story showed how empty and bereft of investigative news Daily Mail has fallen. It reveals the standard of ‘beer-parlor journalism’ being practiced by editorial team of Daily Mail.

Naija Standard can tell you authoritatively that Daily Mail further exposed themselves to opprobrium by alleging that Buhari had over One Million Pounds in his bank account. What is the name of the bank? What is the bank account number? All lies indeed. No truth in the report that is now dubbed a fallacy and journalism of disrepute on social media.
As reported in Daily Mail that Hanan (Aisha), Buhari’s 16 year old daughter traveled on first class from London to Nigeria is laughable. Many Editors fly on first class air tickets to media conferences and seminars worldwide. Probably the anonymous writer of the article (who hid his identity) have no sound information or correct dossier on Buhari: he is a retired General in Nigerian Army, a former Head of State, a former Petroleum Minister and incumbent Nigerian President who has never soiled his hands in the cookie jar of corruption. Journalism ethics says that if you are in doubt of any story, kindly leave out. If Daily Mail had no news to fill their pages, they should have closed down or used cartoon stories as fillers.

Latest information reaching Naija Standard showed that these politicians in their desperate plans to fight back at the Nigerian institution have concluded plans to stir up demonstration by some placards-carrying Nigerians and British citizens at the Anti-Corruption Summit on May 11-12 so that members of the International Community could begin to doubt the sincere war on corruption being fought day and night by President Buhari. Their aim is to sway empathy and outright disconnect between the British and Nigerian Governments such that the earlier planned 250Million Pounds to be given to Nigeria by next year for development should be canceled.

No official statement has been issued by President Buhari’s media team on this matter. 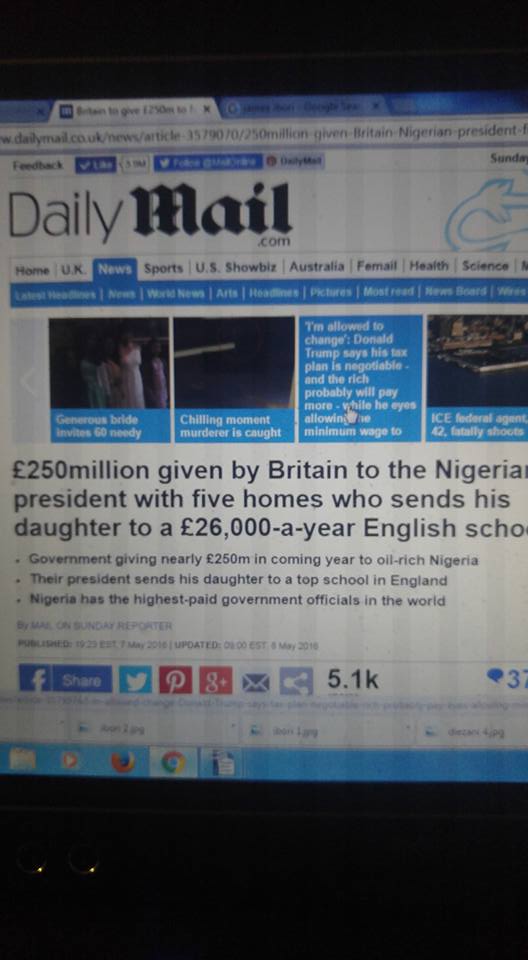 This article was written by Samson Shoaga, Editor of the Naija Standard Newspaper.