Following the exponential explosion in reports of sexual harassment by women which have hit Hollywood, mainstream media, politics and social media, Facebook has moved to protect men by banning women from posting the popular phrase; ‘Men are Scum‘.

SEE ALSO: Italian lawmaker demands Bill Gates be investigated for ‘crimes against humanity’… But WHY?

Facebook sees this as hate speech and have moved to curb it as soon as possible.

Some prominent people hit include New York-based standup comic Marcia Belsky  who was banned for 30 days after posting “men are scum” as a comment on her friend Nicole Silverberg’s photo album detailing the abuse Silverberg had received after writing a list of ways men can treat women better on Twitter. 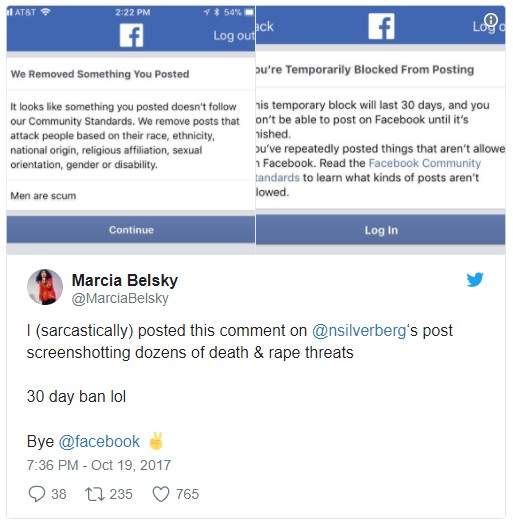 Belsky speaking to the Daily Dot revealed that this wasn’t the first time Facebook had banned her for similar infractions, including jokes and innocuous comments warning about alleged sexual predators.

Another comedian Kayla Avery says she routinely gets banned for comments such as “men are garbage fires”, “the worst”, “trash” and other derivatives. After several suspensions, Avery set up a community project called Facebook Jailed, highlighting the stories of those suffering similar bans for posting comments.

Facebook in response have said that threats and hate speech directed towards a protected group violate its community standards and therefore are removed.

According to them, the phrase ‘Men are scum’ is a threat and should therefore be removed.

Video: “I’ve Not been Paid In 6 Months”- Bobrisky’s Former Gateman Jacob Cries Out

Dangote: Only African in Bloomberg 50 list of year’s most influential people

Trump reveals only condition to leave White House for Biden