Samsung Galaxy S7: Water Resistance And More For “The Phone Of The Future”

The Galaxy S7 and Galaxy S7 Edge both accept MicroSD cards, allowing their storage to be expanded, and can also be submerged underwater.

In addition, they feature new gaming tech and a rear camera that should cope better in low-light conditions.

Their overall design, however, is similar to the Galaxy S6 line-up.

“Although there are significant improvements under the bonnet with the camera, the chipset, the removable storage and the water resistance, Samsung will have to make sure that’s visible to consumers,” commented Ian Fogg from the IHS Technology consultancy.

“Because at a glance they look to be the same as last year’s model.” 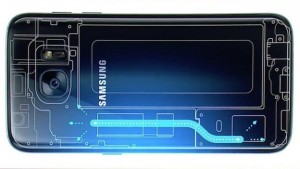 Samsung does not disclose smartphone sales numbers. However its share of the market dropped by 2% in 2015, according to research firm IDC, at a time when Apple, Huawei and Xiaomi made gains.

Even so, IDC’s data still indicates the South Korean firm remains the bestselling brand by a wide margin.

The new devices were unveiled in Barcelona on the eve of the Mobile World Congress tech show.

The Edge version is also slightly curvier than before and its camera protrudes less far out.

In addition, the “edged” parts of the screen now provide shortcuts to email, different photo modes and third-party apps.

They also feature processors that are faster than before and capable of supporting the Vulkan API (application program interface).