Shocking New Evidence Uncovered in the Killing of George Floyd

Prosecutors have discovered new evidence that could change the dynamics of the case of the killing of George Floyd by former police officer Derek Chauvin. According to Chauvin’s representative, they will appeal to the court to dismiss the murder and manslaughter charges using the basic police training manual as justification.

The Minneapolis Police training instructs officers to subdue suspects who resist arrest or are violent by placing a knee on their neck. According to Chauvin’s attorneys, their client followed procedure and did not do any wrong as he followed his training to the letter. 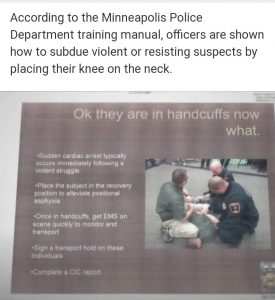 The attorneys also suggested that George Floyd was already overdosed on drugs and this contributed greatly to his death after Chauvin and the other police officers restrained him.

This allegation is being made based on new court documents which showed that Floyd had an unusually high level of Fentanyl in his system at the time of his death. The documents also showed that he indeed resisted arrest which led to police officers applying the lesson in the Minneapolis PD training manual.

The documents highlighted the findings of the medical examiner, Dr. Andrew Baker in Hennepin County who carried out the autopsy on Floyd’s body. According to handwritten notes from the doctor, he found 11 ng/mL of fentanyl in Floyd’s body.

According to the doctor, “If he were found dead at home alone and no other apparent causes, this could be acceptable to call an OD. Deaths have been certified with levels of 3.”

He said further that the level of fentanyl found in the body of the African American was fatal enough under normal circumstances. The finding also revealed that Floyd had a heavy heart and a partially blocked artery.

Based on the new information, Chauvin’s defense attorneys have signaled they intend to argue that George Floyd died from the drugs in his system as well as pre-existing health conditions.

Defense attorneys for the officers have signaled they will argue Floyd died from the drugs and pre-existing health conditions.

The death of George Floyd while being subdued by white police officers sparked protests across America and stoked racial and political tensions across the country.

Transfer Rumours: Messi Release Clause May Be Set At €100 Million

Kolmani Oil Find: I laid groundwork in the 70s – Buhari