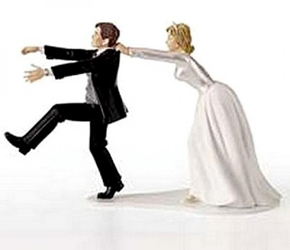 There has been a steady rise in the number of people opting not to get married. This is a definite cause for concern and one must take time to analyze why is it that you are scared of getting married. Just know that being afraid of getting hitched is absolutely normal and justified. However, such doubts should not make you lose your faith in the institution of marriage. We give you some of the rational and genuine fears that you might have before you think of taking the plunge.

This is one question that every woman does and should ask herself before getting married. However, when you are unable to get a clear answer to this question then you are most likely to not take the plunge. Since you are committing to someone for life, it is OK to have such doubts.

One of the most obvious fears when it comes to marriage is that of a divorce. People cringe at the thought of divorce and all the emotional trauma, legalities, and complications that it brings with it. They feel unsure if things will work out in the future or not.

Another major reason why people often do not get married is because they are not really sure of themselves or their partner. They feel scared at the thought of cheating on each other. Since they can’t give any guarantee to each other about the future, they feel it is best to not get married. However, such a fear is an indication that even your current relationship is not strong enough.

4. What if my marriage is like that of my parents?

If your parents did not have a successful marriage then this could make you think twice before you take the plunge. You will feel too scared to repeat the same mistakes that your parents made. This is one of the major reasons why kids from broken families choose not to get married.

5. What if the sex stops being great?

If you and your boyfriend have a very active sex life and are happy in the relationship, then you may think twice before getting married because many people say that the sex becomes monotonous or boring after you are married. This again is a genuine fear that can grip you and make you decide against marriage.

There is a growing concern for the loss of individuality as men and women think of getting married. They feel worried that they will no longer be able to “be themselves” and will have to adjust and make compromises to please the spouse. They feel scared of losing their freedom and the sense of self after they are married.

7. Will we be financially stable?

If either of you are financially unstable then the thought of marriage can really fill you up with a lot of insecurities. You feel scared of the rising costs and wonder if you both will be able to sustain a family with the kind of money you are earning.

8. Am I marrying for the right reasons?

Many a times things like an unplanned pregnancy can lead to the couple wanting to marry each other. Or sometimes they may just take a plunge because their friends think that they are the perfect match. It may so happen that you are marrying someone just to prove your point. In many cases, couples plan to get married just because they are not sure if their relationship will survive the long distance complications. Many a times a person may wonder if he/she is marrying for the right reasons and it is a genuine fear.

9. What if things change for the worse after marriage?

We often hear people saying that people change after they get married. This is one of the main reasons why even those in perfectly happy relationships do not choose to get married. They are too scared of either one of them changing for the worse. It is this fear of the unknown that makes them have second thoughts. They feel that what they have right now is too precious and perfect to take a chance at marriage.

One of the most common fears when it comes to the thought of marriage is the fear of getting bored of each other. The thought of making a lifetime commitment to someone can be a very tough thing to do. Since you have not seen the future, you can never know for sure if you will feel the same love for your partner 10 years down the line.

READ: It is impossible to stick to one woman for one year – Nigerian man

5 Things No One Tells You about Life After Marriage