A video has emerged on social media of a female corps member who performed a parade in a market to honour her elder brother. 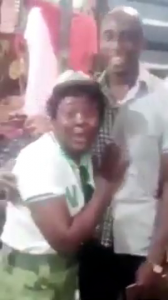 The corps member, Esther Chidinma Oyekwe, who addressed the camera, narrated how the man dropped out of school in order for them, his siblings, to get education after their father’s death.

In the video, the grateful lady, performed a parade to her brother’s shop stating she would like to give him six salutes to pay her respect.

After her military parade, the man walked down from his shop and hugged her.

The female corps member disclosed that he is not just a brother but their daddy.

”You sacrificed your Madonna university admission and went to serve a master so that we your brothers and sister will further our education.

You have been a father and bread winner for 12 years since our dad died.”

The graduate revealed that because of that singular act of love, five of them are now graduates in the family.

Watch her video below:

Lagos dispatch rider absconds with $10,000 employer told him to lodge in bank