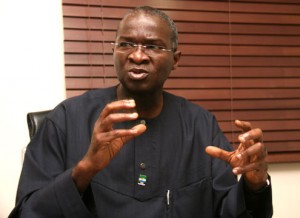 Lagos State Governor, Babatunde Fashola has said Nigeria has fallen amongst the committee of nations in an experience reminiscent of the nursery rhyme ‘Humpty Dumpty’.

THe statement was contained in a statement released by his Special Adviser on Media, Mr. Hakeem Bello, on Fashola’s annual lecture delivered on Christmas eve at the Yoruba Tennis Club, Lagos Island.

He said, “Many nations who either once looked to Nigeria for assistance or leadership will rather now seek not to be openly associated with Nigeria. As if that was not bad enough, those who dared not look us in the face at one time are no longer restrained in making scurrilous statements about us.

He said Nigerians must resolve to be great again.

“Let me remind those who are old enough to remember, and they seem quite many here tonight, and inform those who are too young to know, for it is they who have the largest stake in this future, that our period of greatness was not free of trouble. There was a crime.

“There were labour strikes, there were political struggles; there was disease; and in the midst of our prosperity, there was still a cash crunch, but amidst all of these there was the elixir of hope and a promise of a better life on the horizon,” he explained.

D’usse: The Cognac that has Jay Z and Beyonce ‘Drunk in Love’