Lola OJ reacts to Rumours that Obafemi Martins is her BabyDaddy

Nigerian Beauty Vlogger, Lola OJ, who announced the birth of her daughter over the weekend, has reacted to news making rounds on social media that Obafemi Martins is the father of her newborn. The announcement of the arrival of her baby, came as a surprise to her followers who were not even aware of her pregnancy, let alone the birth of the child who is now three months old.

However, Lola OJ is yet to reveal the identity of her child’s father and there are speculations making rounds on Social media that Nigerian Football Player, Obafemi Martins is the father of the child.

Over the last few months, there have been speculations that Lola OJ is having an affair with Star Football Player Obafemi Martins, who is married to Abigail Barwuah, a Ghanaian-Italian who is also sister to Mario Balotelli.

ALSO READ: Bovi saves fan who was about to commit suicide

Lola has responded to these allegations by sharing a series of posts on her Insta stories. 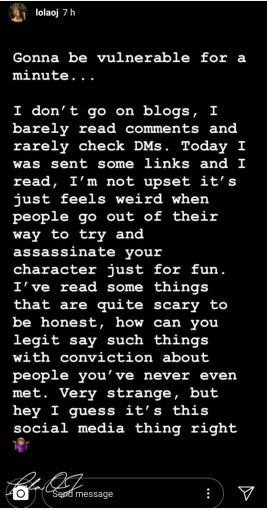