Elon Jet, a Twitter account that tracked flights of Elon Musk’s private jet, was suspended on Wednesday, despite the billionaire’s claims of free speech.

The account was briefly active later in the day, after Twitter announced that it had updated its policy to prohibit tweets from revealing someone’s location in real time in most cases.

Elon Musk tweeted on November 7 that “My commitment to free speech extends even to not banning the account following my plane, even though that is a direct personal safety risk.” It seems like Musk has changed his decision about it.

My commitment to free speech extends even to not banning the account following my plane, even though that is a direct personal safety risk

The University of Central Florida student who created @ElonJet, Jack Sweeney, also ran similar bots that tracked the private jet activity of tech titans like Mark Zuckerberg. Nonetheless, none of Sweeney’s other accounts have been impacted.

“All of my Twitter accounts have been banned. Even my personal make sure to stay connected with me,” Sweeney wrote on Mastodon. 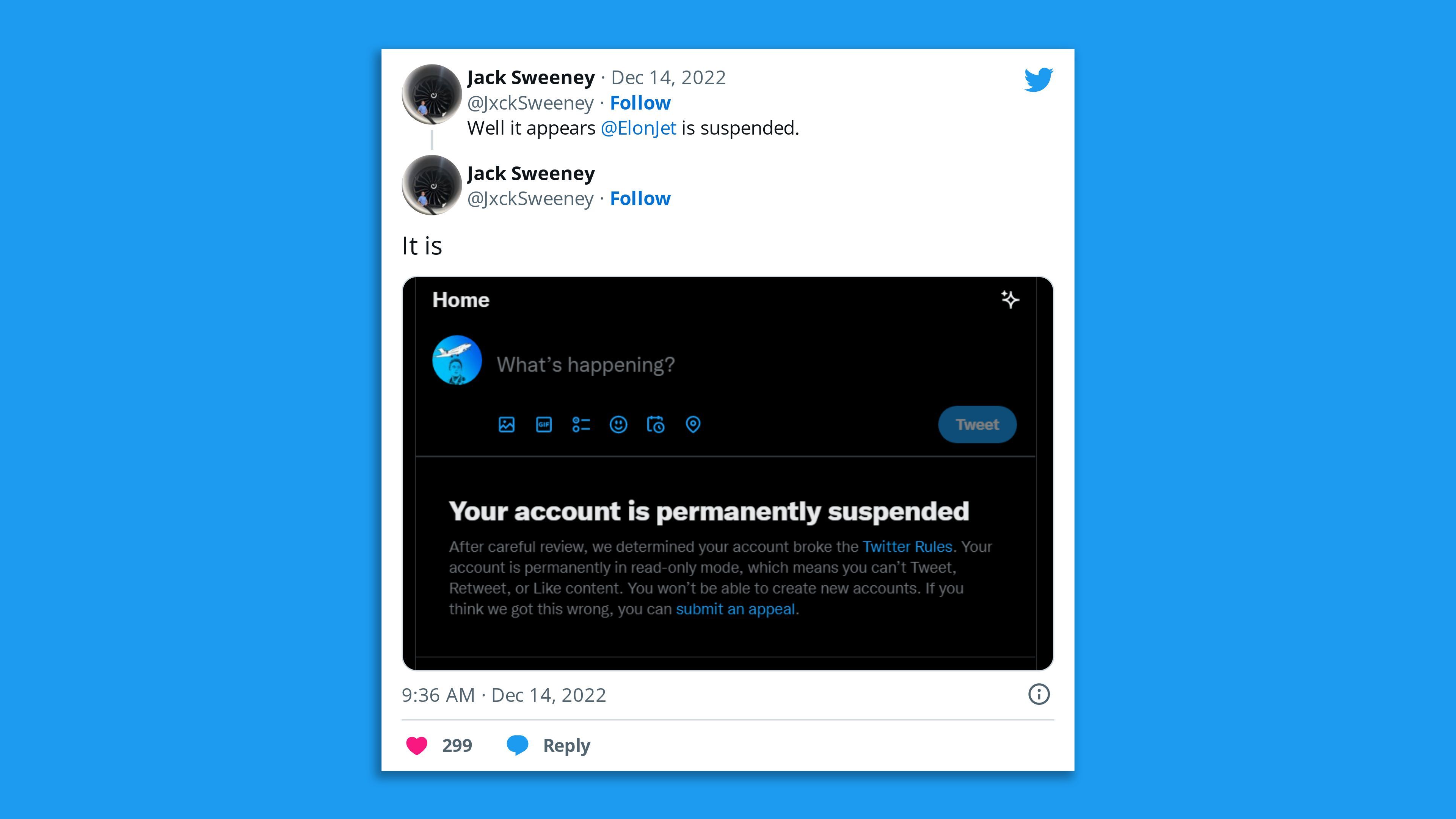 Elon Musk via a tweet said “Any account doxxing real-time location info of anyone will be suspended, as it is a physical safety violation.

Posting locations someone traveled to on a slightly delayed basis isn’t a safety problem, so is ok.

Doxxing is the practice of revealing identifying information such as a person’s home address or phone number online in order to target them for abuse.

Tweets sharing a person’s location that are “not same-day” are permitted, as are posts about being at a public event such as a concert, according to Twitter.

Some users have bashed Musk for posting a video of a guy he claimed was stalking his son. Musk also revealed the guy’s plate number and car.

Anyone recognize this person or car? pic.twitter.com/2U0Eyx7iwl

Someone made a parody account, now suddenly there are new impersonation rules

Someone used public information to Tweet about Elon's jet, so now there are new location rules

One thing is for sure – if it personally offends him, you won't be able to do it anymore

Elon Musk also threatened to sue Jack Sweeney, the creator of Elon Jet on Twitter. “Legal action is being taken against Sweeney & organizations who supported harm to my family,” Musk posted

Users reacted to the suspension of Elon Jet account

In response to the ban of Elon Jet’s account, a user tweeted “So much for free speech. Musk has killed @ElonJet, which was using public aircraft data. I’m overwhelmingly empathetic to doxing and taking action, but there’s no valid argument this endangers anyone.”

Another user tweeted “Elon Musk bought twitter and is personally taking down ppls profiles he deems a nuisance or annoying after he claimed his “commitment to free speech” was absolute. he literally used the elonjet acc (now banned) as proof of such commitment.”

NB, Elon getting upset about this and claiming it’s a “safety risk” was and still is absurd. His plane’s tail number is N628TS. You can track it on several different websites. It’s public information. Always has been, even for military jets outside of combat flights. pic.twitter.com/wdPQVYTUCP

💥BREAKING
HERE IS the EXACT rule the ElonJet and Jack Sweeney accounts violated which got them suspended: Posting the GPS location of a person violates Twitter's DOXXING rules. Tracking and then POSTING the GPS location of @elonmusk's jet violates this rule. Please share. -VJ pic.twitter.com/293P3wd5GN

For those wondering what Elon has to hide by deleting #elonjet
Elon visited Epstein 12x up until his death. But according to Elon he never knew him and was photo bombed by Maxwell. Truth tells a different story and according to Twitter TOS old history of flight tracking is okay pic.twitter.com/SOCby0OS9F

The famous @elonjet account tracking Elon’s private jet has been taken down, despite Elon bragging he won’t take it down—Elon also got sensitive and took down the personal account of @JxckSweeney. ➡️But Elon wants to force you to give your personal location data to use Twitter.🤷🏻‍♂️ pic.twitter.com/0ZrwB31Xle

Twitter suspended the account following Elon's jet but not the one following Jeff Bezos' jet. Even though they do the same thing and are run by the same guy. Why does @elonmusk hate free speech when the speech is about Elon Musk? pic.twitter.com/fOxvNdA3e8

Elon Musk is a bitch. A fascist bitch. Suspending the Elon jet account that uses public info to track his private plane that’s helping to destroy the planet proves how bitch made he is. pic.twitter.com/iqMP9dwARS

I NEVER want to hear another word about free speech from Elon again.

So let me get this straight. If the Joe Biden campaign asks Twitter to remove naked photos of his son, it's "anti-free speech," but if Elon Musk wants to remove the ElonJet account because he desires more privacy, that's perfectly fine with conservatives.

Do I have that right?

The famous @elonjet account tracking Elon’s private jet has been taken down, despite Elon bragging he won’t take it down—Elon also got sensitive and took down the personal account of @JxckSweeney. ➡️But Elon wants to force you to give your personal location data to use Twitter.🤷🏻‍♂️ pic.twitter.com/0ZrwB31Xle

For all the leftists shedding crocodile tears over @ElonJet getting suspended, even absolute free speech has limits. That account was clearly violating Twitter rules. pic.twitter.com/rqnTVWA0Lp

He suspended left-wing activists for telling the truth

After the suspension of @elonjet, it turns out the Twitter rules have been updated. pic.twitter.com/H8eQxPIRUX

he's trying to sue the guy who ran the elonjet account lmao pic.twitter.com/krgaq3Dkyg

Damn, Elon banned the account tracking his private jet, which is a Gulfstream G650 with tail number N628TS. https://t.co/vgTkNGAr1b

Elon has now suspended Jack Sweeney, the creator of the @ElonJet account. If you're a nazi, you're ok to be on Twitter. If you repost public flight information, you get banned. It was never about free speech. pic.twitter.com/QnEVVngjGv

Twitter under fire for tagging Norwegian accounts as ‘Nigeria government…