The fashion designer, Gt da Tailor, who produced the ceremonial outfits that Super Eagles of Nigeria wore to the World Cup in Russia, has lamented that he has not been paid since that time.

Through his Business page on Instagram – GT Stitches, the designer claimed that the Nigeria Football Federation has refused to pay him for the service which he had rendered even before the competition started.

He wrote, “NFF refused to pay for ceremonial outfit almost one year after the World Cup!! This can only happen in Nigeria!!.” 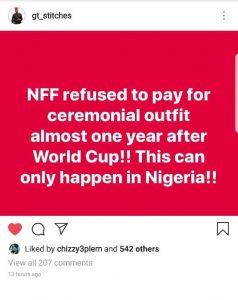