“I got blood test, that’s not my kid” – 50 cent disowns lookalike son

US rapper, 50 Cent, has posted on social media that his son, who he shares a striking resemblance with, is not his own.

The public call outs between the 43-year-old rapper and his 21-year-old son, Marquis Jackson, has been ongoing for some years, causing many to wonder why the duo have so many differences even though they look alike.

Now, 50 Cent has taken the misunderstanding between them to another level, claiming Jackson was not his son on his Instagram page.

The Power producer had had a show in Brooklyn last Friday and Jackson, who went for the event, claimed that he was not even able to stay at the back stage even after he bought the tickets.

A fan later commented on 50 cent’s post on Instagram, asking why Jackson had to pay to watch his own father perform.

The rapper, who is known for his spiteful statements then responded, “I got a blood test, that’s not my kid da f**k outta here.” 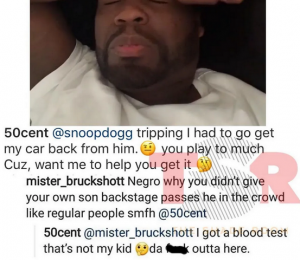 Drug Abuse and the Circle of Casualties – By Jerome-Mario Utomi

My husband made heaven – Ajimobi’s widow