Following the death and investigations into the death of Bobbi Kristina, Bobby Brown’s sister, Leolah Brown has come forward to reveal some shocking, hidden information about the circumstances and condition of the deceased when she was found in the bath tub in January of 2015.

Recall that Bobbi Kristina was reported to have died of drugs, alcohol and drowning, Leolah Brown has this to say;

“To every single person in this world,
Hear me and hear me good. Do not believe the sick, sad and disrespectful rumours about my niece dying of any drug use. They are nothing more than another way to trick you into believing such lies while covering up the actual facts of the truth! Furthermore, anyone trying to force you to believe this is a malicious, evil and deceiving devil. Make no mistake about it; my niece Bobbi Kristina did not die of any drug overdose or anything pertaining to drugs.

When Bobbi Kristina was found dead on January 31st of 2015, the truth is, she was found face down in the bathtub! Her 2 front teeth were knocked completely out of her mouth! I was one of the first people to see her upon her arrival at the hospital. As I stood by her hospital bed I noticed her hair (weave) had been pulled all the way from the front to the very back of her head. Her bruises were very visible and this denoted to me that she was indeed attacked! I immediately knew that whoever attacked her had to have pulled her hair completely out!

The family later found out the Nick Gordan literally grabbed Bobbi Kristina by her head-punching her and dragging her up the steps at the same time! Meanwhile he is ripping her hair completely out of her head leaving her just a little in the very back area. While Nick continues to drag Krissi up the steps-Krissi kept crying and screaming, asking him why he was doing what he was doing to her as she was shocked!? Nick Gordan (the very same man that people feel sorry for today) beat Bobbi Kristina mercilessly!

There was blood trailing up the steps in her home leading up to her bedroom. There was blood that had been cleaned up! There’s a whole lot of things that are very clear & evident to the Brown family that there was indeed deliberate foul play!. Also, there is so much more that the world needs to know and for the sake of my sister Whitney and niece Bobbi Kriss, You have no idea the truth i will be bringing you in my new book.

I will never have the interest whatsoever to ever in this life allow any person(s) walking on the face of this earth to manipulate or insinuate such insidious and treacherous lies to me or my family. It does not take a rocket scientist to fully understand what actually took place on that day that my niece was found. To entertain such thoughts of thinking otherwise would certainly be boldly disrespectful-yet an unfortunate attempt to TRY to insult my intelligence period.

There has never- in the history of this life- been a mother and her daughter found in the same way and they both were complete accidents, drowning or drugs. I don’t know any intelligent person that would even believe that bag of lies-not even anyone with mental problems. These lies that continue to come one after the other will one day have to stop by the hand of God. I have prayed to the Almighty Living God to finally pull that ever so terribly blood-stained curtain back-that all who are guilty may be revealed.

The public has absolutely no idea whatsoever of the facts that-there is so so so so much more to this whole story and God knows I cannot wait to share it with you guys that these devils may be revealed.

Like I said, Ain’t Over! Book is on it’s way to bring nothing but the truth without a chaser…” 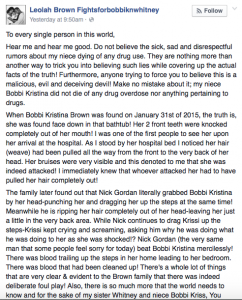 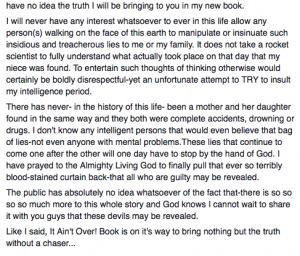