Residents abscond their homes as Major pipeline explodes in Bayelsa

One of the main oil pipelines in Bayelsa has gone up in flames, causing panic among those who reside in the area it occurred. In fact, many have packed their belongings and taken to their heels, indicating that the incident could have been a deliberate attempt by bandits.

The pipeline, known as The Nembe Creek Trunk, houses about 150,000 barrels oil every day. It runs from a particular oil terminal in Bonny, down to Bayelsa.

“We have not been officially briefed on the incident, but it occurred. No lives were lost as a result of the explosion and we can’t confirm if it was an attack by militants or an equipment failure unless the people managing the facility go there” to determine the cause”. 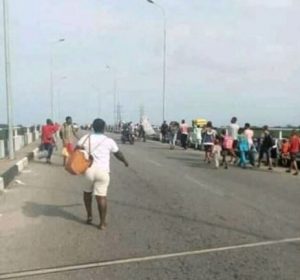 Equally, a public relations officer, Mathew,  who works with the company in charge of pipeline maintenance in the area, has confirmed the incidence via a text message. He added, “There is no official statement at the moment but I can gladly inform you that the fire has been contained and no lives were lost.”

Before now, there have been numerous cases of pipeline explosions. While some are accidents, others are deliberate attempts by bandits who then scoop oil from the affected area to sell in the black market.

Also, read: “I am being persecuted because I won the election”- Trump reacts to former lawyer’s testimony against him

Igbos unite abroad but fight each other at home – Prof Folarin