Ronaldo Announces His Return After Getting Injured

Juventus Superstar, Cristiano Ronaldo, took to his Instagram page to share training pictures to claim his return after sustaining an injury.

Recall that the Portuguese missed the weekend win against Atalanta which saw Juventus win 3-2.

The players and the referee all had a red mark on their face. They  wanted to show their support to all the women who suffer or who have suffered domestic violence. They had the red mark to raise awareness.

The match had goals from Higuain (brace) and late strike by Paolo Dybala.

The Serie A football team will travel during the mid week to face Atletico Madrid. 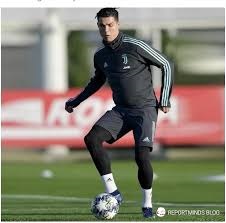